Straight Out of School

Amy Nelson, CEO Venture for America, led the first session of the afternoon. Nelson’s opening statement was her theme: “America needs more entrepreneurs.” In my opinion, this was one of the best sessions of the Summit. 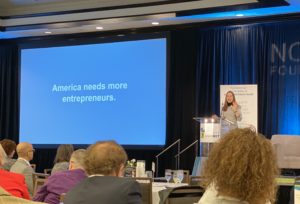 Nelson says that “There are too many barriers and obstacles to starting a business.” Less than .2% of venture funding goes to black women. 80% goes to CA, NY and MA. 2.2% went to women business owners.

On top of that, young adults are graduating with tons of college debt. This inhibits their choices and increases their risk aversion in their early years. VFA’s mission is to mobilize a new generation of entrepreneurs. They have created a program to train recent grads to build businesses, create opportunities and become entrepreneurs.

“For every college graduate who takes a job in an innovation industry, five additional jobs are eventually created in that city.” Where Young College Graduates are Choosing to Live – New York Times.

UNC-CH and Duke have been the source of 38 fellows in the last 2 years to VFA. But 80% of those leave NC, so we must find a way to keep them here for long-term benefit.

In the past, Nelson says that we have created too few options and pathways for entrepreneurship and business owners right out of college in the past. It’s time for that to change.

Corbin began her talk by quoting from George Bernard Shaw character saying that he dreamed of what could be, and says “Why not?”

Corbin tells stories of the UpSkillWNC program which gives opportunities to people re-entering society after being incarcerated. In Catawba county, they are developing a student entrepreneurship pipeline. Corbin believes that the community college system is a great resource for teaching the entrepreneurial mindset. Also, they are in a place to help connect networks to networks.

With the growth of NACCE and their funding partners, they began to think about how to take their influence to the next level. Corbin then announced that they have selected North Carolina as the location for their new national headquarters! 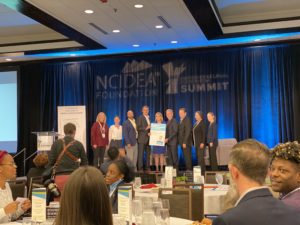 After the big announcement, she pointed each attendee to VIP invitations on the table. Each one was invited to their open house event during National Entrepreneurship Week in Feb 2020.

Stith started his talk with a personal story of grappling with having to talk at one of the last time slots of the afternoon and conference. While prepping and praying about how to do it, a lady from the conference gave him some words of encouragement. Great personal touch.

Stith is the director of the NC District of the US Small Business Administration. He began his career in entrepreneurship, and is trained in the Ice House program. He gave several stats about how much help the SBA gives to NC small businesses. This help includes loans and other resources and services.

Their goal is to help business start, grow, expand and in case of disaster, to recover. The SCORE program has business mentors in 10 chapters across the state. The SBTDC is linked to the university system and located on their campuses. Additionally, there are organizations that help give assistance to women and veterans for starting and running small businesses.

Barry Ryan, VP of the Rural Center, was the moderator for the panel. Members of the panel lead associations and hubs to help small businesses, and one was the owner of a coffee shop in a rural town.

Some of the recurring themes from this segment were the lack of broadband internet access in rural places, the “brain drain” of the younger generation and the necessity of training the entrepreneurial mindset. When asked to sum up in one word what the key to innovation is, here were their final remarks: Learn, Necessity, Opportunity and Collaboration.

Thom Ruhe concluded the 2-day summit by sharing some data on the state of early-stage entrepreneurship. His goal is to create a scorecard for our efforts in NC. In 2017, NC ranked 17th in start-up’s, and 26th in survival after 3 years. But NC ranks 29th in percent of population that starts a new business. In the average number of jobs created by start-up’s, NC ranks 30th.

The key to lifting people up economically to thrive in the next decade, Ruhe comes back to his opening thesis: the entrepreneurial mindset. He proposes a new word: ecosysteming. It is his goal that we do the work of making an ecosystem that will prepare more NC citizens to be the entrepreneurs of the future.